We have been revealed some of the history of Cascina San Maiolo by the few written documents that have reached us so far, but most of it has been disclosed through an attentive observation of the architecture of the complex. That is how we have identified four historical moments. 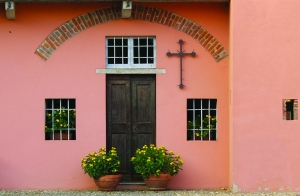 Already in the 10th century the grangia was the building were wheat was stored. As time passed by, it started to be used for the whole of a farm which belonged to a monastery. In the grangia used to work lay brothers (which in monastic communities did manual labour), peasants, shepherds, and artisans, all ruled by a granciere, a monk which represented the abbot. According to the tradition a vaulted room, that we can still see in the farm, lodged the cells of the monks…

On two corners of the farm are still visible lookouts posts with loopholes, a sign that for many years the building was a defensive place from the incursions of several armies of invaders which fought for the territory of Novara, as well as from the assaults of the bandits that were settled in the surrounding areas. Today we can still see a winding staircase that was probably used for reaching fast one of the lookouts.

After a long story of transactions, on April the 30th of 1923, Cesare Tromellini, grandfather of the current owner, bought the property of San Maiolo. The complex had by then the same aspect as today, with the Po Valley farms’ typical structures surrounding the big yard. One of the most evocative spaces is the stable for the heavy horses.