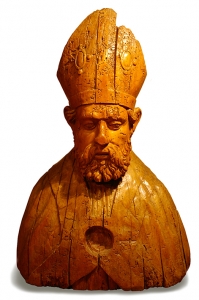 Majolus (Mayeul), the saint after whom our farm has been named, was born in Valensole, Provence, and was the abbot of Cluny from 988 and 994. Advisor to Saint Adelheid of Burgundy, who married Otto I, travelled six times to Italy, from 953 to 987, to take care of the priory he had founded in Pavia and to reorganize the Cluniac monks in northern Italy. In Ravenna, were he reformed the Convent of Saint Apollinare in Classe, he met with Emperor Otto the Great. During his last journey he brought to Cluny William of Volpiano who became abbot of Saint Benignus in Dijon. Majolus died in Souvigny in 994 and the king of France Hugh Capet paid for his funeral. The Saint is represented with a papal tiara at his feet to remember that he refused to become Pope. The ancient bust representing Saint Majolus, which has become the brand of our farm, was found in the farm, thus confirming the connection with this venerated personality.